The thermodynamic process depends upon factors like temperature (T), Pressure (P), Volume (V) and heat exchanged by the system (ΔQ).

Depending on the change in these physical properties, the Thermodynamic processes are divided into different types. These types have some relations governing them.

If a system is said to be reversible, i.e., For a process if the system returns back to its initial state after doing some work then the process is said to be a cyclic process.

For the cyclic process ΔU = 0.

In this article, we are going to study the different types of thermodynamic processes.

Similarly, the work done in isothermal process from pressure p1 & p2 is 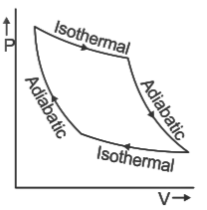 A reversible process is one that is performed in such a way that at the final stage of the process both the system and surroundings return to their initial state with absolutely no change. In reality, there is no reversible process.